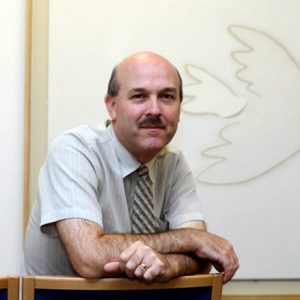 Derek has been a Methodist minister in Northern Ireland since 1989. In 2004 he became full-time Co-ordinating Chaplain at the Royal Group of Hospitals, Belfast. In 2008 he became Lead Chaplain of the newly created Belfast Health & Social Care Trust, managing a team of almost 40 chaplains across 7 hospital sites. He also retains a pastoral chaplaincy role on the Royal Hospitals site.

He is Convenor of the Methodist Church in Ireland Prison & Healthcare Chaplaincy Committee since 2005.

He has been a member of the Board of the UK Board of Healthcare Chaplaincy (UKBHC) since its inception in 2008, initially as a senior officer of the NIHCA and then as Secretary to the Board from 2018.

Derek was the Director of Training of the NIHCA from 2007 – 2018, the Methodist vice-president from 2018-2021 and the Methodist members’ representative from 2021-2022. Following interview and endorsement by the NIHCA Executive, Derek was honoured to be appointed NIHCA President at the AGM on 25th May 2022.

He brings the perspective of having worked in both part time & full time chaplaincy posts. He also brings the NI perspective to the UK scene and vice-versa. He is convinced of the need for chaplaincy to hold together, promote and develop both the vocational/faith and professional agendas to enable chaplains to be people who share hope and compassion in a way that promotes public wellbeing and confidence in healthcare chaplaincy.

He believes the NIHCA is an example in NI and beyond of how chaplains from different backgrounds can work together for the common good, share together, learn together, grow together and make a positive difference for good and for God.

As President he is willing and available to visit colleagues across NI, if invited, to learn from, support and encourage each other. If you have any chaplaincy queries or issues of concern that you feel the President can help with, please contact president@nihca.co.uk

Very sincere thanks to all chaplains for the vital ministries you are exercising. May the Lord bless you and keep you!