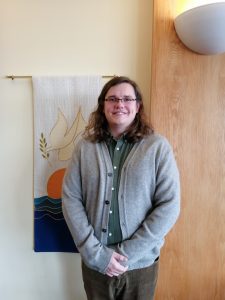 Michael started in chaplaincy as a volunteer in the Royal Victoria Hospital in 2014. After four years, he was appointed as bank chaplain for the Methodist and Others in Knockbracken Healthcare Park. This sparked his interest in mental health chaplaincy. He then moved to be the Protestant chaplain at the Adult Mental Health Inpatient Centre at Belfast City Hospital. He is also the chaplain for the Beechcroft Unit (Children and Adolescent Mental Health Service). Michael’s most recent appointments include as chaplain to care of the elderly and mental health wards in the Ulster, the Lakewood site and Knockbracken Healthcare Park. Michael represents the NIHCA on the College of Healthcare Chaplains Executive Committee and acts as the NI contact.

Michael has served as Chairperson of the Northern Ireland Healthcare Chaplains Association Research Network since 2018. He is keenly aware of the positive impact that being research informed can have on practice, and hopes to help fellow chaplains become research literate. His own research interests include Dementia and Spiritual Care, Chaplaincy Involvement in the Psychiatric Intensive Care Unit (PICU) and the Occurrence of Auditory Verbal Hallucinations (AVH) in Patients Receiving Psychiatric Care.

Michael has worshipped at Crescent Church, Belfast for ten years. He is very involved in pastoral and outreach ministries. He is married to Sophie and has two daughters, Betsy and Bonnie, who he adores.