Kenny Hall has been a hospital chaplain since moving to Enniskillen in 2010 when he was appointed Rector of St Macartin’s Cathedral, and Dean of Clogher. Firstly, as chaplain of Erne Hospital and then continuing as chaplain of the South West Acute Hospital when it was opened in 2012.

He grew up in the parish of Termonmaguirke (Carrickmore), Co. Tyrone and prior to his ordination followed a successful career in the business and financial sector. He returned to study in 1995, was ordained for the Church of Ireland in 1998 and then completed an M.Phil. with University of Dublin (Trinity College) in Reconciliation Studies. Having served as a curate in Derryloran Parish (Cookstown) and in Drumglass Parish (Dungannon), he was Instituted in 2003 as Rector of the parishes of Brackaville, Donaghendry & Ballyclog (Coalisland & Stewartstown) in the Diocese of Armagh.

He is very actively involved in reconciliation work at local level and on a wider basis represents the Church of Ireland on general committees. Dean Hall devotes an exceptional amount of time to building community life and works very closely with Monsignor Peter O’Reilly on all community matters. He also values the many opportunities he gets to meet people, sometimes in their greatest need, during his hospital chaplain work.

He is married to Stephanie and has three sons Philip (Consultant Gastroenterologist in the City Hospital), Gary (Teacher) and Michael (Software Engineer). He has two grandsons and one granddaughter. 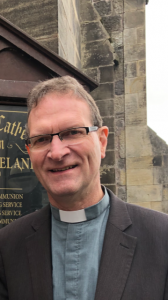