Rosa Wang is hospital chaplain in South West Acute hospital, Enniskillen, Fermanagh, where she has worked for nearly four years. She was born in mainland China, in a devoted Christian family, and is the youngest of five children. She was lucky to be born just before the introduction of the one-child policy.

She joined the Sister of Providence, a diocesan order, in 2008. She studied in Dublin, where she gained a BA in Theology, Pastoral ministry and Spirituality, and then completed an MA in Leadership and Pastoral Care. At the weekends during her studies, she also completed a course in Spiritual Direction at Manresa, the Jesuit Centre of Spirituality in Dublin, and was awarded a diploma in Spiritual Direction. Then an opportunity arose to be trained in hospital chaplaincy at Mater hospital in Dublin. In 2014, she received certification as a hospital chaplain by the Health Care Chaplaincy Board of Ireland.

Rosa loves the beautiful emerald isle and its friendly and hospitable people. She likes walking by the lakes of Lough Erne and taking trips along the Irish ‘Wild Atlantic Way’ with its stunning views of the coastline. Recently she started learning open-water swimming. Over the years she has grown into the Irish culture and is becoming more Irish than Chinese, although her Irish has a long way to go! She enjoys her chaplaincy work in the hospital. She has a deep sensitivity for the pastoral needs of the patients in the hospital and sees herself carrying out God’s mission for God’s people, bringing God’s presence into the lives
of the sick and supporting and comforting them and their families. It is very rewarding and yet challenging job; she needs all your prayers. 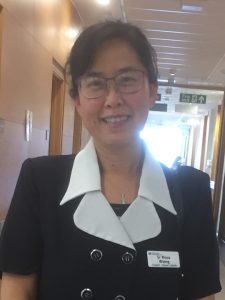