John has been a hospital chaplain since 2014, presently serving as Presbyterian Chaplain in Belfast City Hospital having previously worked in Antrim and Causeway hospitals.  During this time John has completed 2 Units of Clinical Pastoral Education (CPE) and has recently gained Chaplaincy Accreditation status with the Chaplaincy Accreditation Board (CAB).

He is married to Marian (a Staff Nurse), and they have four children John (25); David (23); Sarah (20); and Mark (18) and granddaughter Willow. John grew up in the Pomeroy area of Tyrone and prior to entering the Presbyterian ministry lectured in mechanical engineering subjects at South Eastern Regional College in Lisburn.  He has been a Presbyterian Minister for over 20 years. He completed his Theological studies at Westminster Seminary in Philadelphia.

John counts it a privilege to serve God as a hospital chaplain seeking to address the spiritual needs of patients, their families and staff. Every day the hospital environment brings new challenges and John is thankful for the opportunity to journey alongside not only Presbyterian patients but folk of all faiths or none.

Outside of chaplaincy John enjoys spending time watching his boys play rugby, or acting as groom for his daughter during the Eventing season. He also enjoys watching movies, shooting, playing pool and auctioneering at charity events. 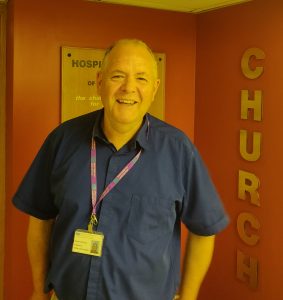