Mervyn has been a minister in the Methodist Church In Ireland since 1999. He recently retired after 20 years serving the church in various posts in Northern Ireland.

He has served the Belfast Health and Social Care Trust as Methodist Chaplain since 2006 and is the Methodist representative on the N.I.H.C.A Executive Committee and ‘Flourish!’ – A Churches’ Initiative on Suicide.

He is a member of the Board of Trustees of Leprosy Mission Northern Ireland.

Mervyn appreciates the many opportunities chaplaincy affords him to draw alongside patients, their families and staff offering support and addressing spiritual needs. He is thankful to God for allowing him this privilege to journey with Methodists and others in the hospital precincts.

Mervyn is a keen walker and likes spending time watching people while enjoying a cup of coffee in a local coffee shop. He enjoys reading with a particular bent on murder mysteries. He is a fan of Midsomer Murders and other detective mystery TV series.

He lives in Newtownards with his wife Helena and they have a daughter, Son, daughter-in-law and 3 grandchildren. 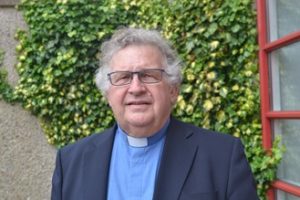